Economic refers to the science of economic.

He failed in economics and geography.

His way of living is most economical.

Effectual means that which produces a good effect.

Effective is that which produces an effect.

Paludrine is very effective for malaria.

Elapse is a verb meaning to pass and is used with reference to time only.

lapse means a period of time.

Many years elapsed after the event and nothing serious happened.

After the lapse of specified period, you can withdraw the amount from the fixed deposit account.

Elder is used with reference to a relative only.

Older is comparative degree of old.

His elder brother came to fetch him today.

Though still in his thirties, he looks older.

An ellipse is a geometrical figure somewhat similar to a circle.

ellipsis is a grammatical term meaning omission of words needed to complete sense.

It is difficult to draw an ellipse without a stencil or a piece of thread.

His whole conversation is full of ellipsis.

Evidence is the statement of fact.

testimony is the confirmation of a statement.

The evidence given by him was recorded by the police.

I bear testimony to the fact that he was an employee of the firm in the year 1928.

Excuse me, Pardon me

Excuse me is employed when the fault committed is minor.

pardon mean is used when the fault is serious and objectionable.

Excuse me I never requested you to show favour to me in any matter.

Pardon me, sir, I had no intention to injure your feelings.

Eruption is bursting out

Some years back there was an earthquake in Japan attended with volcanic eruption.

The irruption of the Huns destroyed fabric of the roman Empire.

Farther is used with reference to distance or space

further implies something additional in thought.

The nearer the church, the farther from God.

I know nothing further than that.

The word future should be used to denote time only.

In future you should be careful about your work.

Subsequent events proved that he made a wrong start.

He was gratified to recover his lost dog.

I am grateful to you for your many acts of kindness to me.

He has a graceful appearance.

God save our gracious king.

Greed means instigate longing for something,

He is so greedy what he would never be satisfied with what he gets.

Grandiloquent is one whose style is pompous or verbose.

eloquent is one who is a fluent and powerful speaker.

Our professor is rightly regarded as a grandiloquent speaker since his speech is usually full of sound and fury signifying nothing.

Handicap is an artificial

hindrance resulting in advantage or disadvantages.

He succeeded in spite of many handicaps.

He proved a hindrance in my way.

happily means in a happy manner.

Happy I may remember and haply forget.

They lived happily over afterwards.

Henceforth means ever after his time implying continuity

hereafter means in future and also means in the next world.

Henceforth he will act as our leader and spokesman.

Hereafter we shall not quarrel with each other. 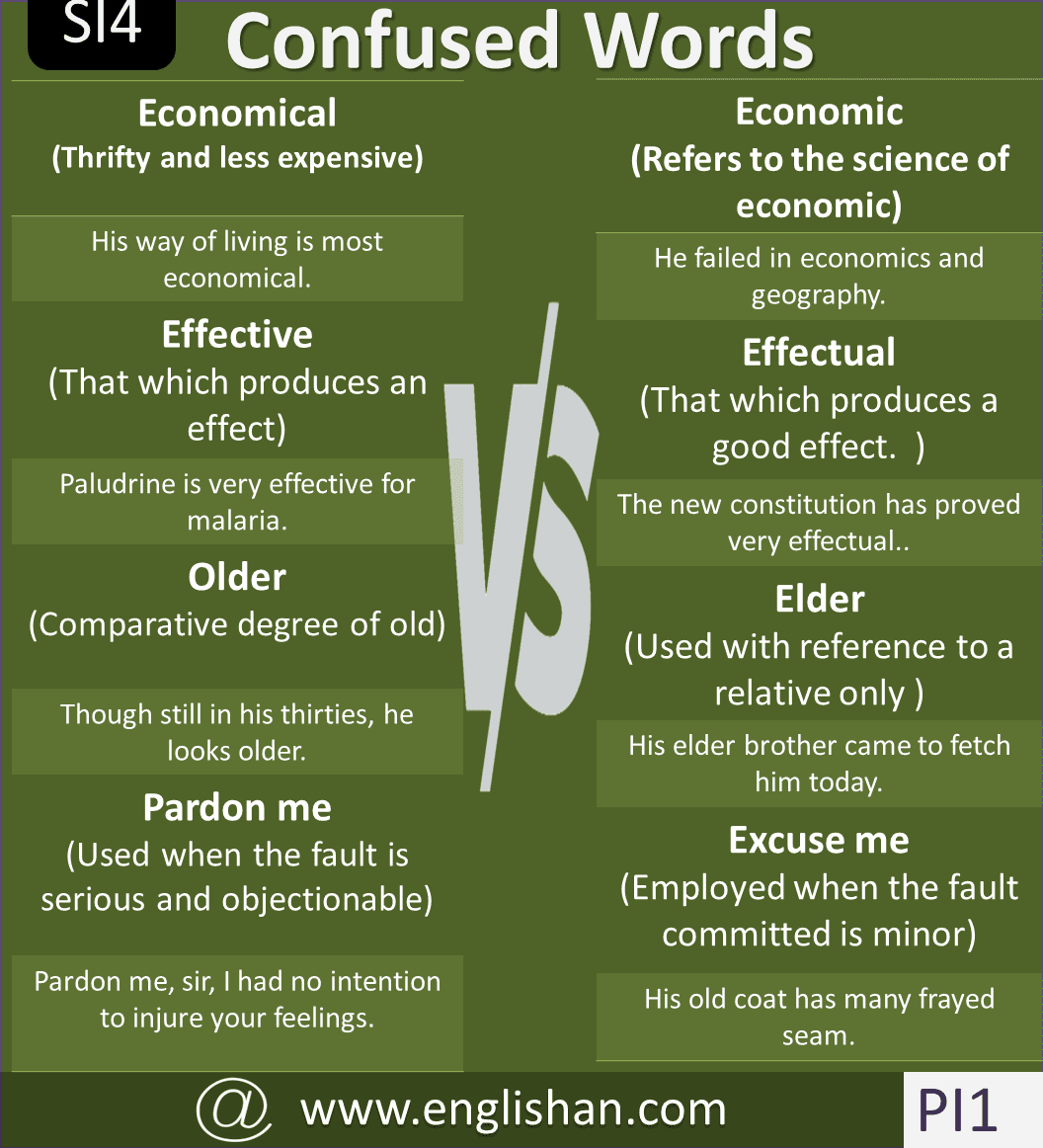 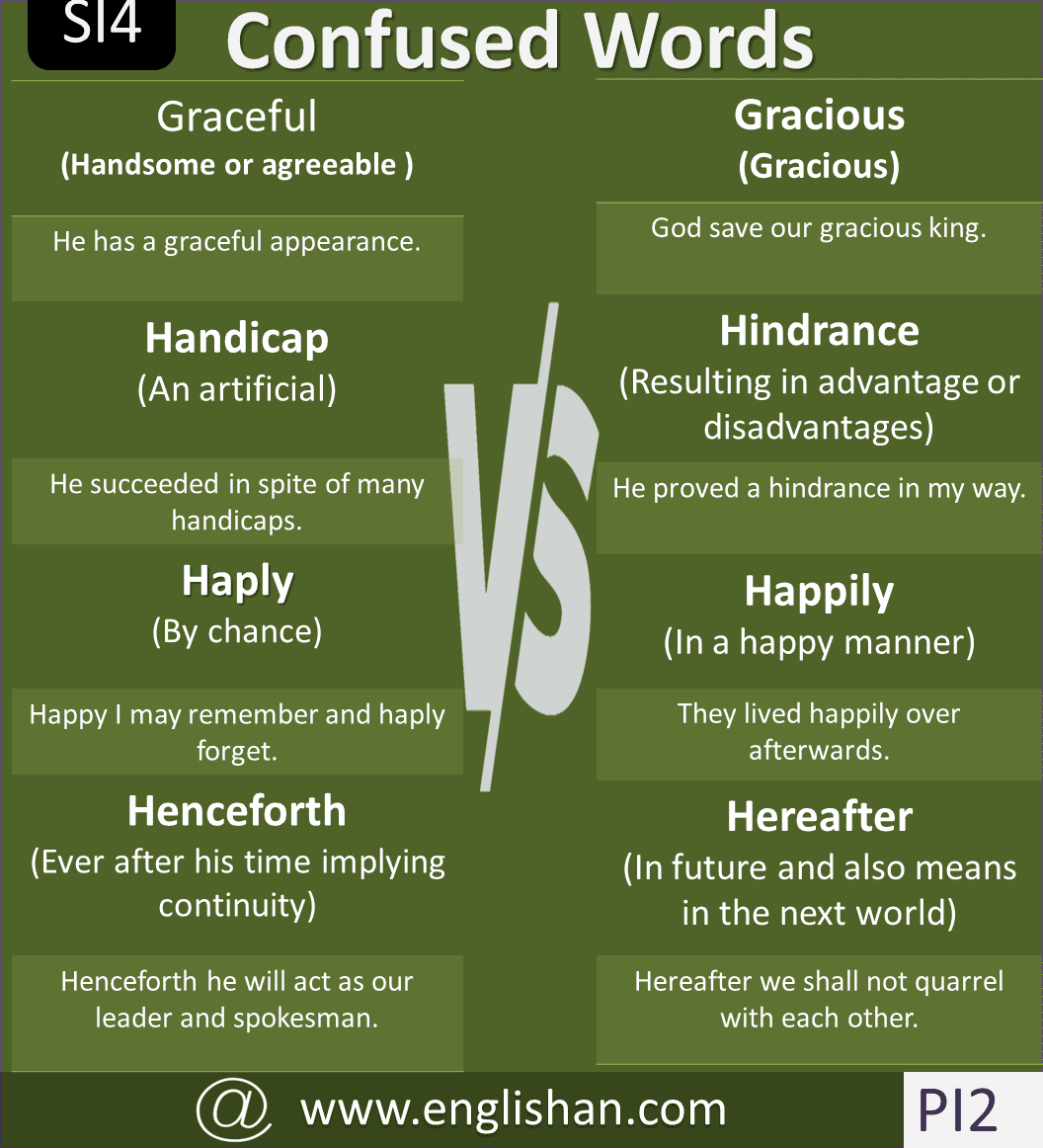 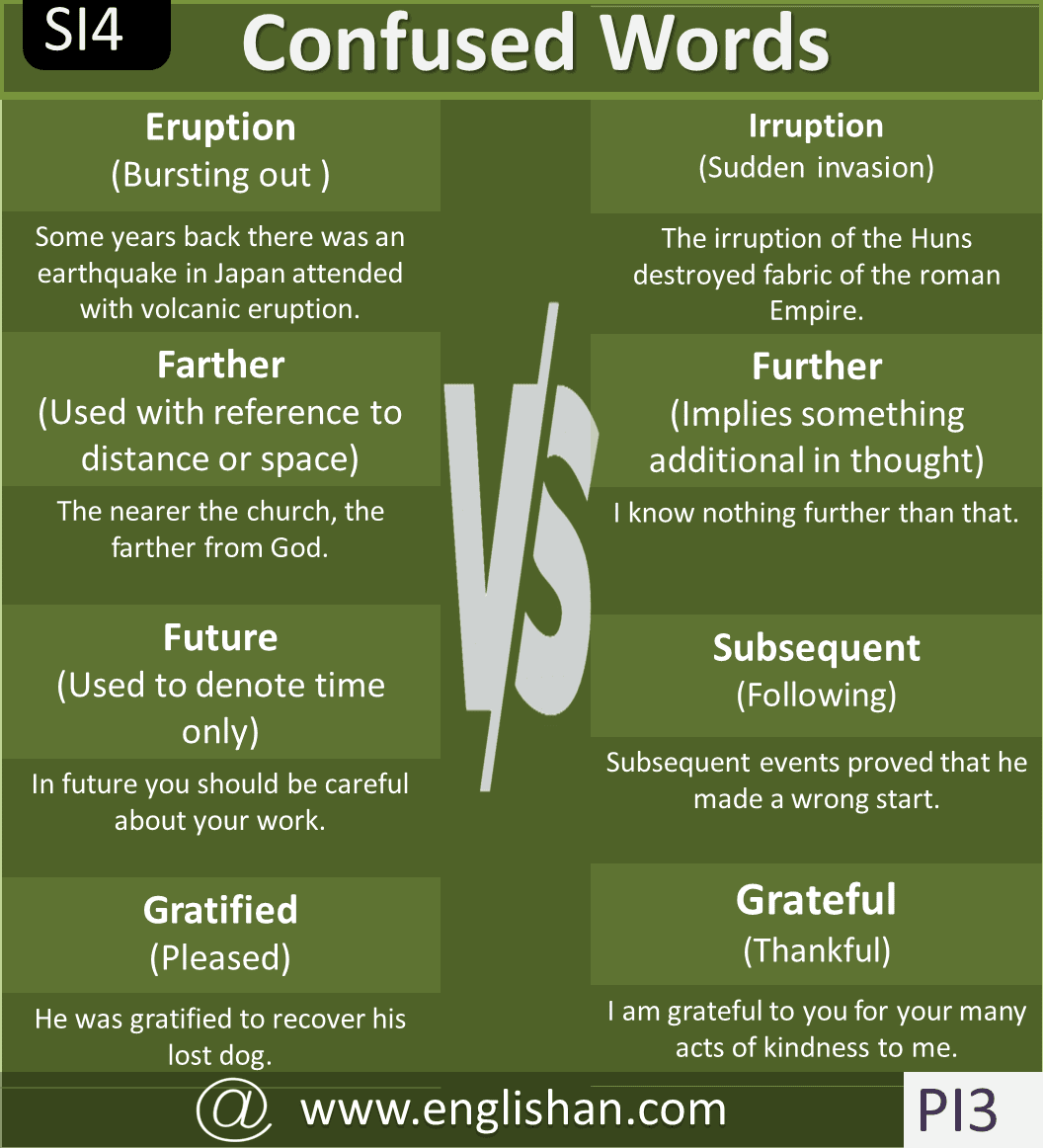